group was discussing, and a facilitator who helped with the interaction and group reflection. The meetings were composed of 15- 40 stakeholders, who had a vested interest in the issue, for example, What to do about the influx of immigrants or How to develop a plan for the development of the West side of the city.

The Plein were unlike typical government meetings. There were no speeches or presentations, and no panel of council members up on a stage. Rather, meetings started with everyone in a circle, talking about why the issue was important to each of them. Then they met in small mixed groups to talk in more depth, often alternating between the full group and small groups discussions. Hans and Nelleke had to search out the first few Plein, but it wasn’t long before managers were asking if they could hold a Plein. 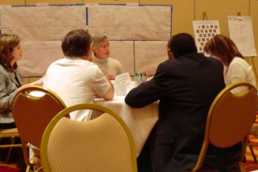 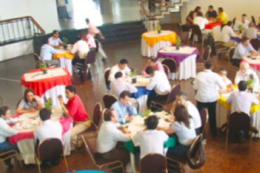 Utrecht is the fourth largest city in The Netherlands with a population of more than 300,000. The Utrecht city government faced increasingly complex issues that required cooperation between departments and an ever-growing involvement of stakeholders from across the city. Maarten Schurink, the new City Manager, did not want to put into place a big program that would be perceived as coming from the top of the organization, rather he wanted to develop bottom-up solutions. His direction to Hans van Soelen, Program Manager for Organizational Change, and Nelleke Metselaar, Communication Specialist, was to develop organizational learning with the help of the people themselves.  The two leaders drew on ideas from a number of sources, among them Appreciative Inquiry (Cooperrider), Theory U (Scharmer), Collective Sensemaking (Dixon) and Generative Questions (Gervase Bushe). I was invited to help because of my work on Collective Sensemaking, which the group named Plein, a Dutch term that meant an informal meeting place for conversation, often in a Park in the center of the city.

other projects. We spent time reflecting on what we had learned from listening to the stories about how to spread knowledge. And the stories served to build relationships between those present, many of whom were meeting each other for the first time.

Over the two days we heard from each of the four gurus and paused to reflect after each, in order to think together about what we had learned and how it might be applied to health care quality improvement.  We jointly created a historical time line about where healthcare improvement had been and where it was going and had in-depth conversations about shared experiences

There was also a growing group of volunteers who helped to invent and support the Plein, not HR staff, but employees who found the conversational process worthwhile and beneficial. Over the last three years they have held over 150 Plein and the Plein has become the way problems get solved within the Utrecht City Government.

award winners to instruct EcoPetrol on how to do KM. Rather they were there to bring a diversity of ideas about KM. The second day, we held an all day long knowledge café, with small tables where participants talked with colleagues for 30 minutes then moved to talk with a new group – we moved six times until everyone knew what everyone else was thinking. The participants, including the MAKE experts joined in the knowledge café, as did the president of EcoPetrol. We asked the participants to answer two questions in their table discussions, 1) What KM processes did you hear from the MAKE winners that you think might work at EcoPetrol? 2) What knowledge is critical for EcoPetrol to manage? That evening, while the rest of us were drinking wine and watching colorful dancers, the note takers 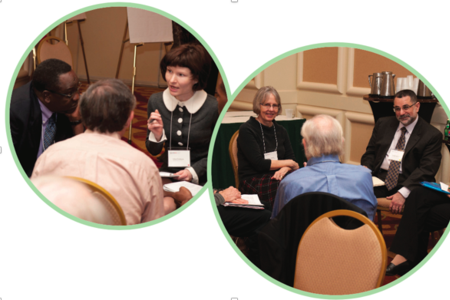 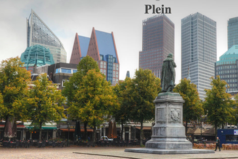 and hopes for quality improvement, based on the timeline.

On day two we held a knowledge café about how we could put some of the concepts we had experienced to work. And then brought those ideas together to create action plans. By the end of the two days, participants had learned who to go to in their growing network and had built plans for moving forward. We ended the two days going around the circle to give everyone a chance to express appreciation to another person from whom they had gained insight -  demonstrating that appreciation is one of the important keys to knowledge management. The meeting was designed around seven “Big Ideas” that URC continues to use in its knowledge management projects.

I invited four KM Gurus from very different sectors to the meeting to offer a diversity of ideas. The agreement I made with them was that they would each speak for only 15 minutes, but would participate in the conversations for the full two days. And indeed, the rest of the two days was conversation. We started with a dinner the night before where participants had a chance to meet informally. (Rule of thumb – always start with a dinner the night before)  On the first day, in small groups of five, we asked participants to, “Tell a story of a successful knowledge sharing experience in healthcare that you are familiar with: what happened, and what were the factors that made it successful?”  They told wonderful stories about how they had learned from 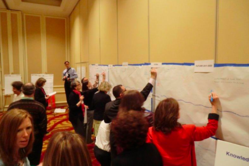 from each table met to develop themes based on what had been said.

The next morning they presented the whole group with twelve themes and everyone was invited to join a group based on the theme they could best contribute to. The task of each group was to come up with an action plan for that theme.  By the end of the third day when the twelve groups reported back, we had a knowledge strategy for Ecopetrol and one that no one had to “sell” because they had created it!

Nelleke explained a Plein this way, “When a complex issue or dilemma arises which cannot be solved without a broader perspective, a manager could ask for a Plein: a meeting where we take the time to talk the issue over with the right colleagues, partners or expert.” There was no requirement for managers to hold a Plein, but over a period of two years as problems arose, such conversational meetings were held. In those meetings there was a problem owner, often a manager who framed the issue and then became a part of the group discussion, a chair person who was a high level official, but one not involve in the issue the 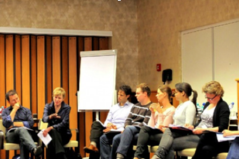 How To Build A KM Strategy That Everyone Buys Into - EcoPetrol

​      Several years ago, I helped EcoPetrol, the National Oil Company of Columbia, bring together the top 200 leaders in the company for a three-day meeting to build a KM Strategy. We held the meeting in a beautiful resort in the mountains of Columbia – well away from headquarters. We invited 15 MAKE (Most Admired Knowledge Enterprises) award winners to speak at the meeting on the first day. But we allowed only 15 minutes for each to speaker, because we didn’t need the

The Deep Dive – Learning How To Do KM in Two Days

I have long believed that the best way to understand knowledge management is, not to listen to a presentation, but to actually experience it. I had the opportunity to prove that concept through one of the consulting engagements I am most proud of, The Deep Dive. University Research Corporation (URC) had a contract with USAID to support Health Care Improvement (HCI) and to spread that knowledge worldwide. Before the Deep Dive, much of the focus of HCI’s knowledge management system had been on the documentation of quality improvement experiences in specific countries and for specific problem areas. But half way through the project, URC began to realize that “collecting” just wasn’t working as a spread technique.
The Project Director, Rashad Massoud, had heard me speak at a Spread Conference and invited me to design a two day experience for HCI staff from the many countries they worked in, as well as other healthcare organizations and donors including, USAID, Institute for Healthcare Improvement (IHI), Johns Hopkins Center for Communications Programs, the Bill and Melinda Gates Foundation, Iowa Health System, the International Society for Quality in Health Care, and the Health Resources and Services Administration. Participation in the meeting was by invitation only, in order to keep the number of participants to a number that permitted a productive dialogue.